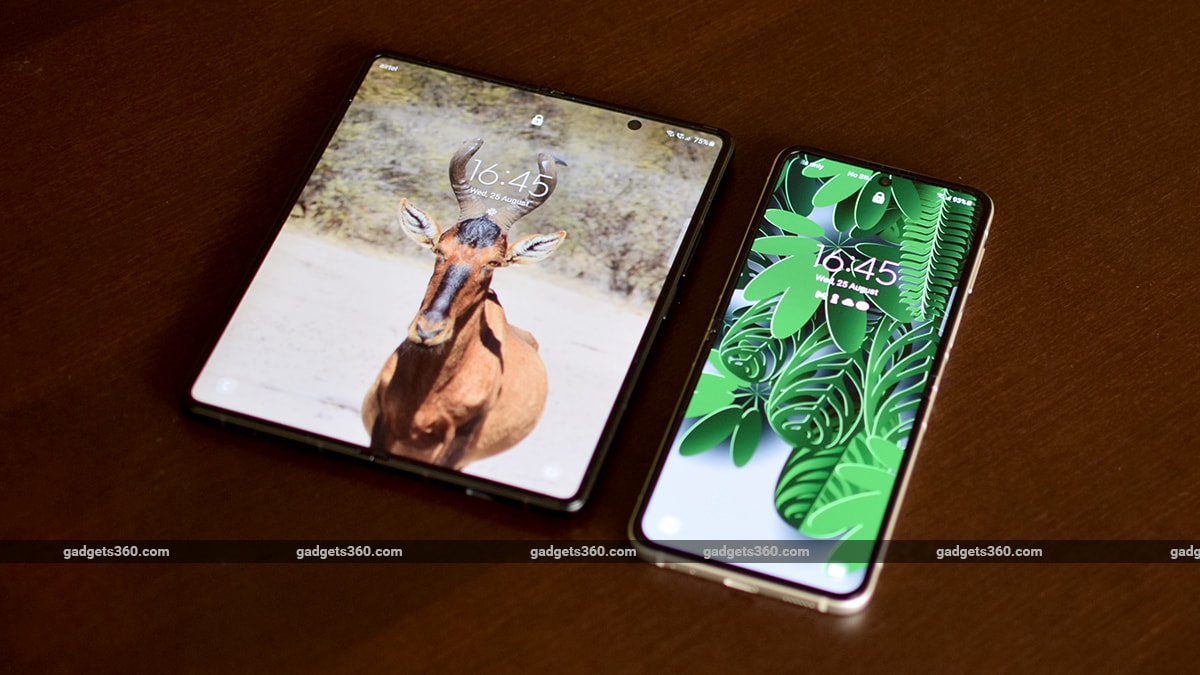 Flexible displays have been shown off at trade shows for more than a decade and Samsung has led the charge in putting them to good use, starting with the original Samsung Galaxy Fold in 2019.

Fast forward to today and Samsung is still arguably leading the pack when it comes to foldable smartphones. Sure, Motorola and Huawei have launched their versions of foldable phones too, but neither seems to be innovating and launching new and improved devices with the same urgency as Samsung. The company recently launched the third generation of its Galaxy Z Fold and the second generation of the Z Flip foldable phones, and I’ve been using both for a couple of days now, which is enough time to give you my initial impressions.

Let’s begin with the Samsung Galaxy Z Fold 3. This new model is lighter than its predecessor and said to be more durable thanks to a new ‘Armor Aluminium’ frame. I haven’t personally used the previous model all that much, but what I can say is that the Galaxy Z Fold 3 feels incredibly well-built and rugged. It makes a reassuring snap when you fold the display, and there’s absolutely no unwanted flex in any of the panels. The Phantom Black colour looks great and the matte finish does not attract a lot of fingerprints.

One of the most notable changes to the Samsung Galaxy Z Fold 3 is that the outer display or cover screen, as Samsung calls it, now supports a 120Hz refresh rate just like the main folding screen. The resolution is only HD+ but content looks fairly sharp. Typing on this screen is a bit challenging due to how narrow it is but perhaps it’s something I could get used to over time. The cameras, buttons, speakers and ports are all laid out in a similar fashion as a standard phone, but the real magic is on the inside.

The folding mechanism opens up to reveal a massive 7.6-inch QXGA+ resolution (2208×1768) AMOLED panel. There’s a layer of ultra-thin (UTG) glass over the panel, which Samsung claims is up to 80 percent more durable than on the previous model. The Galaxy Z Fold 3 even supports Samsung’s S Pen stylus, a first for any foldable, but you’ll need to buy the special Fold edition S Pen or buy the S Pen Pro, as the ones that ship with the Galaxy Note and Galaxy Tab won’t work. The crease along the folding axis is still visible, but it’s barely noticeable when the display is on and when you view content head-on.

The other big addition is the under-display selfie camera. When displaying lighter content, the circular camera is visible due to the much lower pixel density in that area compared to the rest of the display, but for darker backgrounds like when watching a video, it’s completely hidden. As for the quality of the camera, it’s definitely not as good as the hole-punch camera in the outer display, but I’ll still reserve my judgement for the full review.

The Samsung Galaxy Z Fold 3 is quite a handful and is clearly aimed at users who love multitasking and don’t mind carrying around an unwieldy device. The Galaxy Z Flip 3 on the other hand is for a completely different set of people, who want an even more compact smartphone. I used the first Galaxy Z Flip for a few days, and compared to it, the improvements in the new model are definitely noticeable.

First off, this is the second-generation of the Flip, contrary to what its name suggests. The most useful change in my opinion is having a larger 1.9-inch cover screen, versus the 1.1-inch display on the previous model. The pixel count is the same, but the new panel is larger and much more responsive, so you can do much more like preview emails, add widgets, etc.

The Galaxy Z Flip 3 weighs the same as the older model and is actually a tad thicker when unfolded. The cameras are said to be better, which I will be testing in the full review. It’s also available in plenty more colours, however at the time of publishing this article, only a few have been launched in India. The matte finish of the aluminium frame looks very nice and is a lot more sophisticated than the glossy finish of the previous model.

The folding display is also fitted with the latest UTG glass and it does support a 120Hz refresh rate. The hinge feels less springy than before, but you’ll still need two hands to open it. The foldable display looks great, colours are punchy, and yes, the crease is still visible but only if you view it off-axis.

Samsung has used Qualcomm’s Snapdragon 888 SoC in both models, so speedy performance and 5G support are a given. Another upgrade common across both the Galaxy Z Fold 3 and the Galaxy Z Flip 3 is the fact that both are now IPX8 rated for water resistance; another first for any foldable phone.

The latest foldables from Samsung feel more refined and premium. But are they ready for mass adoption?

Samsung’s first-generation Galaxy Fold was more of a proof of concept and a statement piece, but now the latest generation feels as though it’s ready for mass adoption. The same goes for the Galaxy Z Flip 3, which doesn’t feel like a one-off luxury product that someone might buy just for novelty’s sake. There’s still a lot of testing to be done to see what these phones are like to live with in the real world, but so far, it’s looking positive. Don’t forget to check back for full reviews coming soon, in which I’ll be taking a deeper dive into the software, cameras and battery performance of these new foldables.