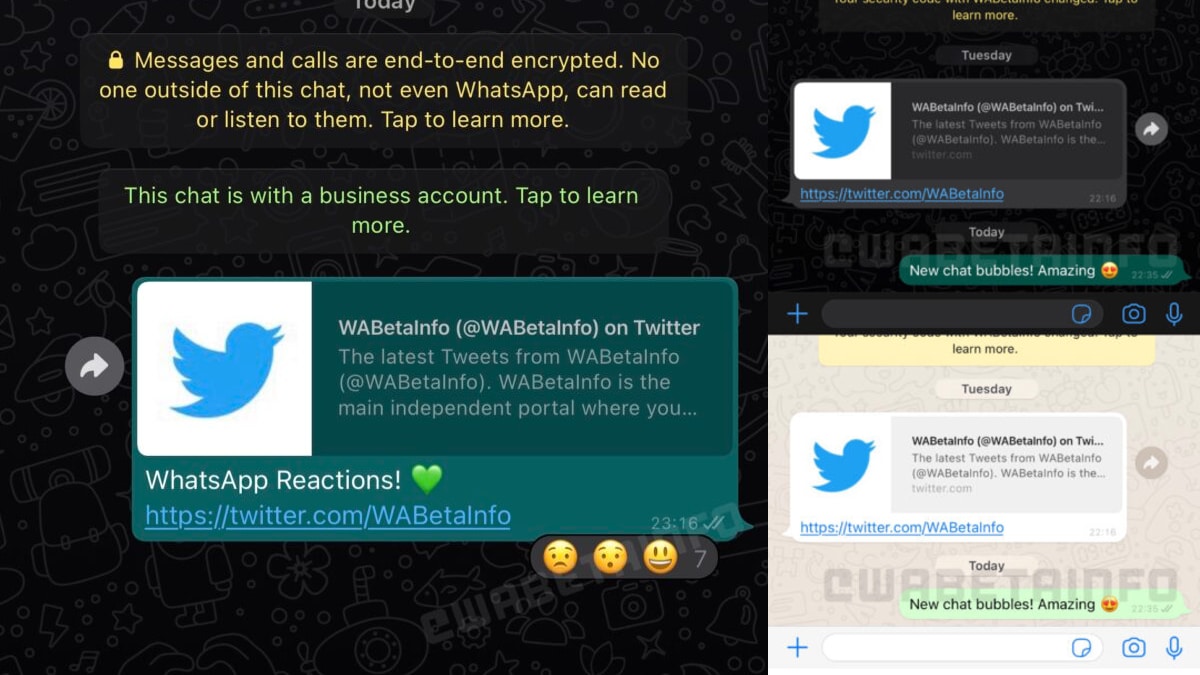 WhatsApp is reported to be working on message reactions and a new screenshot shows how this may work when it launches. Message reactions or emoji reactions as they are also known will allow users to react to a specific text in a conversation with an emoji. The screenshot suggests that users will be able to use any emoji for reactions. The instant messaging app is also reportedly working on the new chat bubble redesign for iOS users, a UI change that has already been introduced for Android beta users. Additionally, it is also looking to expand the new archive interface for multi-device function users.

Beginning with reactions, WhatsApp features tracker WABetaInfo has shared a screenshot of how these reactions may look like when they roll out. Reactions will show up below the chat bubble in a small dialogue and they won’t be anonymous, so everyone in the conversation will be able to see who reacted to a specific message. The screenshot shows that it will be possible to react using any emoji a user wants. This emoji reactions screenshot was taken from WhatsApp for iOS, but the tracker says that it is under development for Android users as well. This feature is still under development therefore users even on the latest beta builds will not be able to spot it as of yet.

WhatsApp is also reported to be working on new chat bubbles design for iOS users, the features tracker says. It was implemented for Android beta users with WhatsApp beta for Android 2.21.13.2 and now it is reported to be under development for iOS users. It has not yet been enabled for iOS beta testers though. The new redesign brings a more rounded chat bubble and a new green colour.

Lastly, WABetaInfo reports that WhatsApp is also working on bringing the new archive feature to desktop users on multi-device. The new archive does not automatically unarchive users’ archived chats when new messages arrive. It is only available for WhatsApp Web and Desktop users currently but WhatsApp has enabled it for when desktop users use multi-device as well. This is currently rolling out with WhatsApp Desktop beta 2.2135.1 version and it may roll out commercially after testing for a while.

Tasneem Akolawala is a Senior Reporter for Gadgets 360. Her reporting expertise encompasses smartphones, wearables, apps, social media, and the overall tech industry. She reports out of Mumbai, and also writes about the ups and downs in the Indian telecom sector. Tasneem can be reached on Twitter at @MuteRiot, and leads, tips, and releases can be sent to tasneema@ndtv.com.
More